Spring at last and it’s not just our hair that needs a good trim! Easter Saturday saw this year’s first outing for garden volunteers Ali and Dave who gave the short back and sides treatment to Mrs A.’s garden.

Lisa from The Leys Health Centre, who had put us in touch with Mrs A., sent us this lovely message:

“Thank you so much Ali, that looks fabulous! It will make such a difference to her. Please thank Dave too. What you do is amazing and restores my faith in humanity“

Three cheers for volunteers Ali and Dave who braved one of the coldest and most miserable days of the year so far to head off to Northway (or do I mean the North Pole?) last Saturday to help out an elderly resident with a seriously overgrown hedge.

As most of the people East Oxford Good Neighbours helps out are elderly, it looked as if Covid restrictions might mean the end of the line for us for the foreseeable future.

Not so! Back in June we were contacted by our good friends from The Fulbrook Centre at the Churchill to see whether we could rescue one of their patient gardens. We carried out a risk assessment and made a few adjustments to make sure that we could do the work safely, masked up and off we went for some socially-distanced gardening. 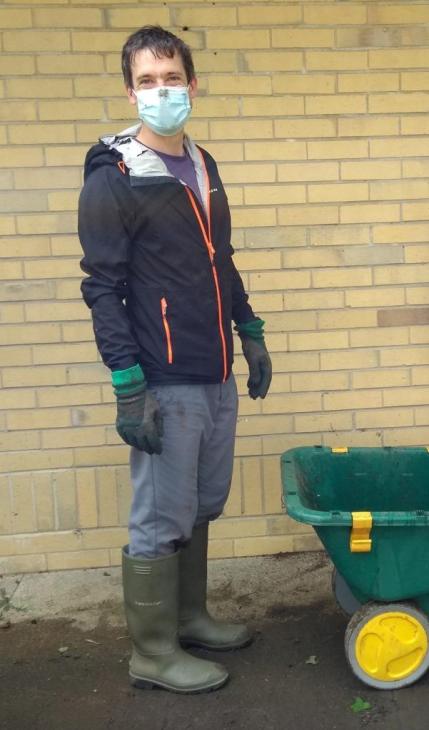 We’ve now done a couple of sessions with the help of  volunteers from the Oxford Hub and the garden is beginning to come back to life.

As well as our lovely volunteers, we’d also like to say a huge “Thank you” to local businesses who made a contribution to restoring the garden area:

Homebase helped out with a large bag of compost

Cutteslowe Community Garden Centre gave us discount on a trolley of foxgloves and cowslips. 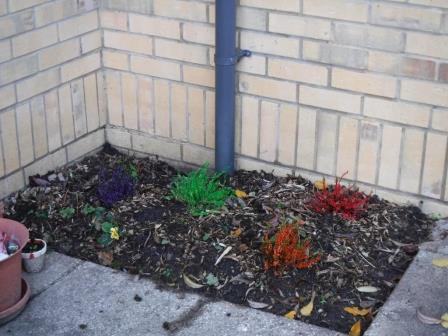 “Thank you so much to you all for sorting out city community garden. Everyone who has seen it has mentioned how lovely it is. You did an amazing job and we are very grateful.”

After all our hard work on the patient’s garden at the Fulbrook Centre back in the spring , we were saddened to hear that it was being closed. However – good news – Fulbrook is back in business and got in touch to see whether we could pop in to give it a short back and sides in time for its re-opening on 11th November.

Despite Saturday the 9th being one of the wettest days in the history of the world, we managed to find a gap for our team  of eight volunteers to get stuck in.

Tulika pruned and weeded, Will cleared the weeds between the paving slabs, whilst Iqbal tackled the borders. Meanwhile, Jo dealt with the self seeded sycamore saplings (roots and all).

Jon impressively transformed the bottom wilderness into a groomed border in the blink of an eye! His experience as an educator combined with gardening knowledge was very useful  to the volunteers who wanted advise during the session.

Jo and Jon got the garden waste in wheelbarrow bags to the skip area outside. They also used the wheelbarrow to bring a load of bark to dress the borders.

Dayana and Valentina between them stripped the dead brown leaves from the palm trunks, which now look characteristically exotic) and helped Will with removing the weeds. Valentina also helped Ali plant the coloured heathers and bulbs.

Last, but not least, the team was more than grateful to Carol, the NHS service manager who punctuated the proceedings with food and hot drinks and to everyone who helped with transporting tools and people.

We were sorry to hear about the recent death of Eileen M. of St Clement’s, who we visited just only last month.

Her neighbour Maggie contacted us a few months ago about getting some garden help for Eileen. A team went along on 18th May and  had a lovely session working on Eileen’s front and back garden.

Sadly, Eileen passed away only a few weeks later.

Ali contacted her kind neighbour Maggie and suggested using flowers and foliage from Eileen’s garden to make a personal funeral tribute for her. The heart-shaped wreath was complemented by some lovely white roses supplied by Maggie.

At the funeral gathering, Eileen’s daughter, Tara, told Ali how much joy having her garden had brought to her mother during her last few days and how amazed Eileen had been at the happiness of the young volunteers who worked so hard that day.

The flower heart brought great comfort to Tara and Maggie on the day of the funeral, especially with the lavender, privet flower and yellow hypericum in it.

Ali writes, “The good neighbour garden project can help people in different ways –in this case it gave an elderly lady peace of mind that her garden once again was looking so nice!! Maggie is a shining example of what a good neighbour should be, as she worked tirelessly to clear the house, organise the funeral and find a loving home for Eileen’s dog, Honey!”

June is a busy month for gardens, so last Saturday found our volunteers dodging the rain and braving the sub-zero temperatures to help local pensioner J. bring some happiness to his bungalow.

J. had already made a start on the weeds in his back borders, so the Team finished the job and tackled more weeds in the paved area. Ali had helped J. buy some summer plants, so after a quick lesson in how to plant things (“mix compost, dig hole, put compost in hole, put plants in compost”) and J’s troughs were soon planted up. It’ll be a great show in a few weeks from now (if it doesn’t snow).

When M asked if East Oxford Good Neighbours could help her R, her mum, and her sister with their garden, we got a team together and headed off to Blackbird Leys.

The lawn needed a short back and sides – R asked whether we could her next door neighbours lawn as well, as he also needed some help. No problem!

Time for some weeding followed by a quick break for the students to check their mobile phones and volunteer Yoojin tells us about her mother’s garden back in Korea.

We finished the job by removing a self-seeded tree and weeds that had been blocking the window (a common problem) and brought the rosemary under control.

Another win for The Weedubsters!

Our good friends at DRARA are having an Open Gardens event on Sunday, 9th June 2019, starting at 2 pm. Register and collect a map from Sinnet Court, Southfield Road, Oxford, OX4 1FY.